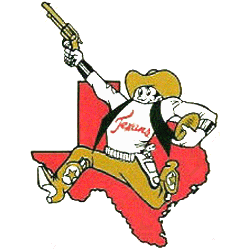 The American Football League’s Dallas Texans in 1960, featured a polished football toting gunslinger set over the state of Texas in red. The gunslinger is wearing cowboy boots and hat carrying a football and a gun. A design created by Bob Taylor, a cartoonist for the now defunct Dallas Times Herald.