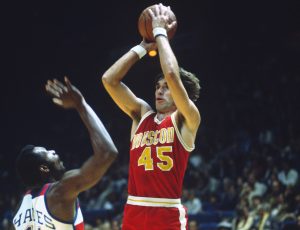 LANDOVER, MD – CIRCA 1974: Rudy Tomjanovich #45 of the Houston Rockets shoots over Elvin Hayes #11 of the Washington Bullets during an NBA basketball game circa 1974 at the Capital Centre in Landover, Maryland. Tomjanovich played for the Rockets from 1970-81. (Photo by Focus on Sport/Getty Images) *** Local Caption *** Rudy Tomjanovich; Elvin Hayes