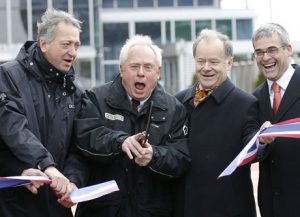 Montreal Canadiens owner George Gillett (second from left), with Claude Dauphin, president of the executive committee of the city of Montreal (left), Quebec liberal party minister Raymond Bachand (second from right) and Montreal Canadiens club president Pierre Boivin cut the ribbon at the Montreal Canadiens Centennial Plaza at the inauguration of the plaza Thursday, December 4, 2008. The event was part of the 100th anniversary celebrations of the storied hockey club. On the left is a sculpture of Béliveay and in the right background is a sculpture of Lafleur. (THE GAZETTE/John Kenney)

When Toronto Got Buffaloed By the NBA

YesterYears – The Birth of the Red Wings Franchise