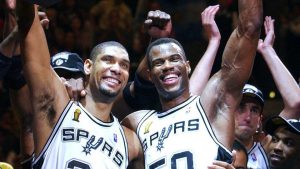 In this June 15, 2003 file photo, San Antonio Spurs players Tim Duncan (21) holds his MVP trophy while teammate David Robinson (50) holds the championship trophy after the Spurs beat the New Jersey Nets 88-77 to win the NBA Championship in Game 6 of the NBA Finals in San Antonio. Robinson was 37-years-old when he rode off into the NBA sunset with a fresh Lawrence O’Brien trophy under his arm and his legacy as the greatest player in Spurs history firmly intact. It’s been 10 years since Robinson retired, leaving his team in the hands of Duncan and a couple of precocious and unpredictable young guards named Tony Parker and Manu Ginobili to carry forward. (AP Photo/Eric Gay, File)