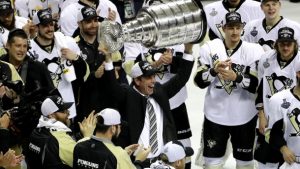 SAN JOSE, CA – JUNE 12: Mike Sullivan of the Pittsburgh Penguins celebrates with the Stanley Cup after their 3-1 victory to win the Stanley Cup against the San Jose Sharks in Game Six of the 2016 NHL Stanley Cup Final at SAP Center on June 12, 2016 in San Jose, California. (Photo by Ezra Shaw/Getty Images)

The Birth of the Red Wings Franchise