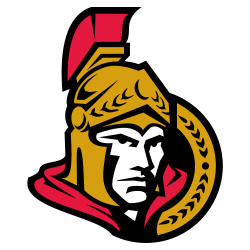 The Senator’s logo is officially the head of a Roman general, a member of the Senate of the Roman Empire, projecting from a gold circle. The logo is slightly more upright and the additional squint in the eyes makes him more stoic. Mirroring the shift toward visor use in the NHL, his helmet also protects more of his face.