As sports fans, there is no doubt that we are passionate about the current sports landscape whether be in the NBA, NFL, NHL, MLB, and other leagues. As passionate as fans are about the present state of sports leagues domestically and internationally, fans are also deeply entrenched in exploring the past history of some of the great sports teams in history.

There is no question that diehard fans of their favorite sports fans will often have a passionate discussion with either fellow members of their fanbase or diehard members of their opposing fanbase about their favorite teams. Additionally, there are many people who are just diehard fans of particular sports.   They love to get into the past and present history of teams in the NBA, MLB, NHL, and NFL, and all other sports with team sports history.

Now, sports fans have a one-stop place to get access to the vast history of their sports teams. Sportsteamhistory.com can be thought of as an online encyclopedia for team sports brief history.

We have some exciting features that will be sure to whet one’s appetite with regards to learning about the history of a sports team.

One will be really intrigued by Sports Team History’s “Timelines” feature. Every team has a timeline with the relevant history of each and every single team with corresponding images. The timeline features some of the most significant moments in the history of each team.

There are many times in which you may remember a significant moment that has happened in the history of your team, yet you may not quite remember the year. Each team’s history is covered chronologically with the year of the major occurrence featured.

If you are a sports fan, there is a high likelihood that you may have gotten into an argument with someone over who is the greatest player in the history of the NBA, NFL, or another league. Another argument may surround who is the greatest player ever at a particular position in league history. These arguments take place at the water cooler at work, on Twitter, or on major sports studio shows.

At Sports Team History,  we look to settle these arguments once and for all with our “Greatest Player Polls” feature.

The “Greatest Player Polls” feature has a series of “greatest player” categories. Once a person clicks on the link with a particular category, you will be taken to its poll.

The history of sports is incredibly vast. However, Sports Team History can be seen as a valuable resource that will answer all questions and settle all debates when it comes to sports team history.

Team's History in a timeline

A timeline of every team's history with relevant images.
See NFL Teams 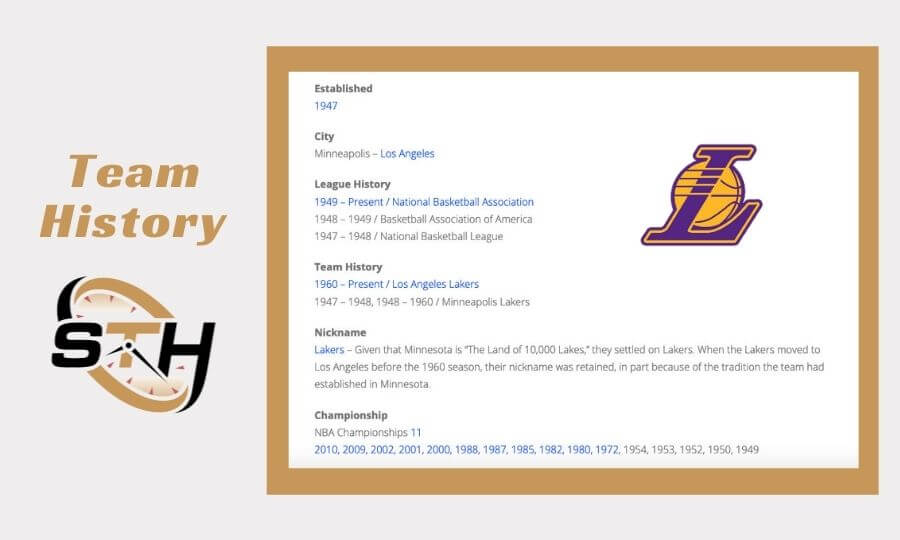 Follow each professional team's history of their cities, stadiums/arenas, owners and much more.
See MLB Teams

Polls from every sport with the greatest players and positions as well.
See Greatest Players Polls

The origins of every team's nickname. How they came to be the Cardinals, Marlins or Predators.
See NBA Teams