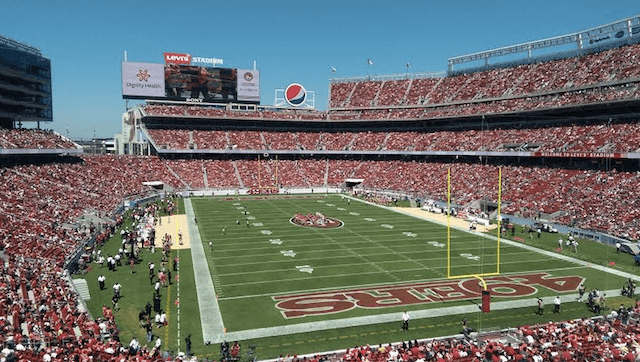 On November 8, 2006, reports surfaced that the 49ers ended negotiations with the city of San Francisco about building a new stadium and plan to do so in Santa Clara, 38.3 miles south of the team’s current home field, Candlestick Park in San Francisco; Santa Clara already hosts the team’s administrative headquarters and training facility. The Yorks and then-San Francisco mayor Gavin Newsom had been talking over the last few months about building a privately financed stadium at Candlestick Point that was intended to be part of the city’s bid for the 2016 Summer Olympics. The 49ers’ final decision to move the stadium ended the San Francisco bid for the 2016 Summer Olympics.

The 49ers sponsored Measure J, which appeared on June 8, 2010, Santa Clara, California ballot, to build a new stadium as the future home of the San Francisco 49ers in that city. The measure passed with 58.2% of the total vote. This was seen as the first step for the 49ers stadium relocation to a new venue to be built in Santa Clara.

The 68,490-seat, Levi’s Stadium, landed rights for its first event. The stadium will be home to the Fight Hunger Bowl.

On May 8, 2013, the NFL’s San Francisco 49ers announced that San Francisco-based Levi Strauss & Co. had purchased the naming rights to their new stadium in Santa Clara, California. The naming rights deal calls for Levi’s to pay $220.3 million to the city of Santa Clara and the 49ers over 20 years, with an option to extend the deal for another five years for around $75 million.