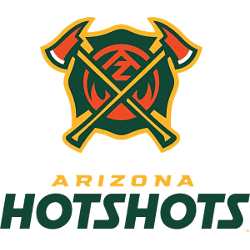 History of the Hotshots

The Arizona Hotshots are a professional American football team based in Phoenix, Arizona, and are the 5th team to join the upcoming Alliance of American Football. The Hotshots were the 5th of 8 teams announced for the new league, which is set to play in February 2019.

Rick Neuheisel was announced as the head coach of the Arizona Hotshots by the Alliance of American Football on May 18, 2018. The team was slated to play at Sun Devil Stadium. By September 25, Scott Brubaker and Phil Savage were named team president and general manager, respectively.

Phoenix's name and logo were revealed on September 25, 2018, as the Arizona Hotshots along with the other three western teams. The name is a tribute to the region's firefighters, nicknamed hotshots, while the color scheme of green, orange, and yellow are commonly worn by such fire crews. The team's logo is a pair of crossed pick head axes, which are used by structural firefighters and not the wildland firefighters the team is named for. The branding was developed by the national office and then handed off to the team staff. Reception of the name was mixed, with some arguing it "exploits the memory of the Granite Mountain Hotshots." On March 3, 2019, the team retired No. 19 to honor the 19 Granite Mountain Hotshots killed in the Yarnell Hill Fire in 2013.

On October 11, 2018, the team named Hugh Freeze as the offensive coordinator and the rest of the coaching staff. In the 2019 AAF QB Draft, the Hotshots did not protect the assigned (by geographical method) quarterback Mike Bercovici in the first round and instead selected Trevor Knight for his speed. The final 52-man roster was set on January 30.

In January 2019, the Hotshots held their preseason camp in San Antonio. They won their season opener at Sun Devil Stadium on February 10, 2019, against the Salt Lake Stallions.

Nickname
Hotshots – “The Arizona Hotshots pay tribute to the elite, highly-trained teams of firefighters organized by the United States Forest Service and other federal, state and county agencies that bravely battle the most serious wildland fires around the country,” the AAF said in a press release Tuesday. “The Hotshots will have a profound appreciation for fearlessness, skill and honor and will selflessly play together as a team each week.