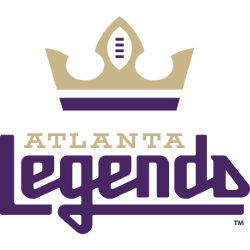 History of the Legends

The Atlanta Legends are a professional American football team based in Atlanta, Georgia, and are charter members of the Alliance of American Football. The Legends were the 2nd of 8 teams announced for the new league, which is set to play in February 2019.

The Alliance Atlanta team was announced by the league on April 25, 2018, as its second initial team. Additionally, the head coach, Brad Childress, and offensive coordinator, Michael Vick, were announced. On September 20, the league announced four eastern inaugural franchises' names and logos including Atlanta as the Atlanta Legends. The name and colors (purple, gold, white) are tributes to famous historical figures from the city, such as Martin Luther King Jr. and Hank Aaron.

Nickname
Legends – Players come and go, legends live forever. Atlanta is a city of legends, those who are heroic, larger-than-life, celebrated and storied on and off the field. From Hank Aaron and Chipper Jones to our very own Michael Vick, the greats come to Atlanta to be immortalized. Some of the biggest legends of the civil rights movement have called Atlanta home. Centennial Park stands as a monument to the achievements of Olympic legends. Atlanta houses legendary establishments such as the historic Fox Theatre. This is where legends are made.