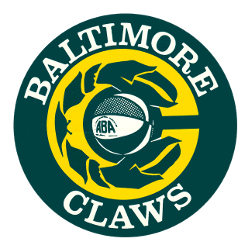 The Baltimore Claws was an American basketball team which was supposed to appear in the 1975 – 1976 season in the American Basketball Association. The team collapsed before the season started, playing only three exhibition games, all losses, in its brief history.

Nickname
Claws – The new owners first named their team the “Baltimore Hustlers,” and sent out a season ticket brochure using that moniker. When the ABA league office got wind of the “Hustlers” nickname, it strongly objected. The ABA higher-ups felt that the name “Hustlers” had too many negative connotations, and strongly encouraged the Baltimore owners to choose another nickname. Soon after this directive, the “Baltimore Hustlers” quietly became the “Baltimore Claws.” A second season ticket brochure was sent out, with the new nickname.

Name is derived from the claws of a crustaceans species such as a crab or lobster, which is a huge industry in the Baltimore area.