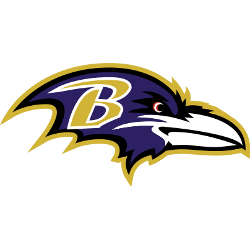 The Baltimore Ravens are a professional American football team based in Baltimore, Maryland. The Ravens compete in the National Football League (NFL) as a member club of the American Football Conference (AFC) North division. The team plays its home games at M&T Bank Stadium and is headquartered in Owings Mills.

Nickname
Ravens - Of the more than 33,000 voters in the Sun’s phone-in poll, more than 21,000 picked Ravens. “It gives us a strong nickname that is not common to teams at any level, and it gives us one that means something historically to this community,” said team owner Art Modell, who had attempted to buy the Colts nickname back from the franchise that left Baltimore for Indianapolis in 1984. The Marauders nickname referenced a B-26 built during World War II by the Glenn L. Martin Company, a predecessor to Lockheed Martin that was based in Baltimore. Other names considered included the Railers, Bulldogs, Mustangs, and Steamers. Ravens, a reference to Edgar Allan Poe’s famous poem, beat out Americans and Marauders in a contest conducted by the Baltimore Sun. Poe died and is buried in Baltimore.

Who is the greatest Baltimore Ravens?