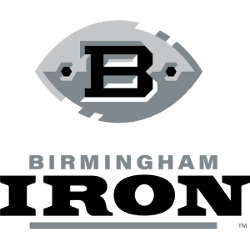 The Birmingham Iron is a professional American football team based in Birmingham, Alabama and are charter members of the Alliance of American Football. The Iron were the 7th of 8 teams announced for the new league, which is set to play in February 2019.

The team was announced as a charter team of the Alliance of American Football on June 4, 2018. The team's first head coach was announced on June 6 as Tim Lewis, his first job at the position. On September 20, the league announced four eastern inaugural franchises' names and logos, including Birmingham as the Birmingham Iron. The name is a tribute to the city's iron industry, while the team colors of black, dark grey and light grey were based on iron ore, coal, and flux, the components used to make steel.

The final 52-man roster was set on January 30, 2019. The team's first game was at home against the Memphis Express on February 10, 2019, when the Iron registered their first win and the first shutout in league history.

On May 31, the Iron clinched a playoff berth with a win against Atlanta, though the playoffs were never played as the league suspended football operations on April 2.

The AAF closed down operation on April 2, 2019, and Iron finished with a record of 5 wins and 3 losses. The Iron finished in 2nd place of the Eastern Conference.

Nickname
Iron – Pays tribute to the hard working steel workers who provided the Iron that fueled the industrial revolution. The people of Birmingham are tough, hard working, passionate, strong and dependable, attributes that will quickly become synonymous with the Birmingham Iron.