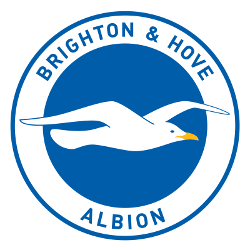 Founded in 1901, and nicknamed the "Seagulls" or "Albion", Brighton played their early professional football in the Southern League, before being elected to the Football League in 1920. The club enjoyed greatest prominence between 1979 and 1983 when they played in the First Division and reached the 1983 FA Cup Final, losing to Manchester United after a replay. They were relegated from the First Division in the same season.

By the late 1990s, Brighton was in the fourth tier of English football and were having financial difficulties. After narrowly avoiding relegation from the Football League to the Conference in 1997, a boardroom takeover saved the club from liquidation. Successive promotions in 2001 and 2002 brought Brighton back to the second tier, and in 2011, the club moved into the Falmer Stadium after 14 years without a permanent home ground. In the 2016 - 2017 season, Brighton

Nickname
The Seagulls, Albion
This nickname is possibly the most obvious for all the teams in the Premier League. "The Seagulls," for Brighton & Hove Albion. The club is situated on the southern coast of England, famed for sun, beaches and… seagulls. This nickname has taken quite the journey though, originally they were the "Dolphins" from the original crest. Then at a derby against Crystal Palace, fans were heard chanting "Eagles, Eagles" to which the Brighton & Hove fans responded with "Seagulls, Seagulls."

Who is the greatest Brighton & Hove Albion FC?