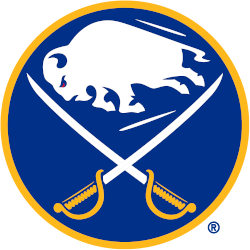 History of the Sabres

The Buffalo Sabres are a professional ice hockey team based in Buffalo, New York. They are members of the Atlantic Division of the Eastern Conference of the National Hockey League (NHL). The team was established in 1970, along with the Vancouver Canucks, when the league expanded to 14 teams. They have played at KeyBank Center since 1996. Prior to that, the Buffalo Sabres played at the Buffalo Memorial Auditorium from the start of the franchise in 1970. The Sabres are owned by Terry Pegula and coached by Dan Bylsma.

Nickname
Sabres – Wanting something other than a variation on buffalo or bison, owners Seymour Knox III and Northrup Knox had a contest after being awarded a franchise that would take the ice in 1970. They wanted something unique and Sabres, suggested by four people from among 13,000 entries, was the winner; it beat out entries such as the Mugwumps, Buzzing Bees and Flying Zeppelins. The owners chose Sabres because “a sabre is renowned as a clean, sharp, decisive and penetrating weapon on offense, as well as a strong parrying weapon on defense.”

Who is the greatest Buffalo Sabres?