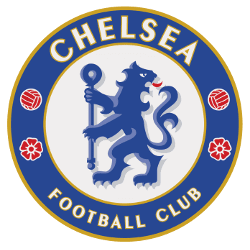 In 1904, Gus Mears acquired the Stamford Bridge athletics stadium with the aim of turning it into a football ground. An offer to lease it to nearby Fulham was turned down, so Mears opted to found his own club to use the stadium. As there was already a team named Fulham in the borough, the name of the adjacent borough of Chelsea was chosen for the new club; names like Kensington FC, Stamford Bridge FC and London FC were also considered. Chelsea were founded on 10 March 1905 at The Rising Sun pub (now The Butcher's Hook), opposite the present-day main entrance to the ground on Fulham Road, and were elected to the Football League shortly afterwards.

Nickname
The Blues, The Pensioners
The nickname comes from the well known Chelsea Pensioners – war veterans living in a nearby hospital. In 1905 the club adopted the crest of the Chelsea pensioners, and the nickname was adopted.

Over the years Chelsea has developed their nickname into "The Blues," as it has always been the color of their kit, and their crest wore a blue lion. One of their popular club chants even has a blue theme to it "Blue is the color."

Who is the greatest Chelsea FC?