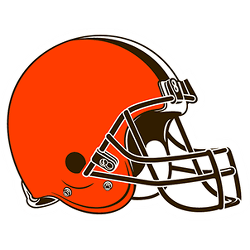 The Cleveland Browns are a professional American football team based in Cleveland, Ohio. The Browns compete in the National Football League (NFL) as a member club of the American Football Conference (AFC) North division. The Browns play their home games at FirstEnergy Stadium, which opened in 1999, with administrative offices and training facilities in Berea, Ohio. The Browns' official colors are brown, orange and white. They are unique among the 32 member franchises of the NFL in that they do not have a logo on their helmets and are the only team named after a specific person, original coach Paul Brown.

Nickname
Browns - There’s some debate about whether Cleveland’s professional football franchise was named after its first coach and general manager, Paul Brown, or after boxer Joe Louis, who was nicknamed the “Brown Bomber.” Team owner Mickey McBride conducted a fan contest in 1945 and the most popular submission was Browns. According to one version of the story, Paul Brown vetoed the nickname and chose Panthers instead, but a local businessman informed the team that he owned the rights to the name Cleveland Panthers. Brown ultimately agreed to the use of his name and Browns stuck.

Who is the greatest Cleveland Browns?