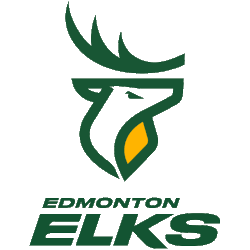 The club competes in the Canadian Football League (CFL) as a member of the league's West division and plays their home games at The Brick Field at Commonwealth Stadium. The Elks was founded in 1949 as the Edmonton Eskimos and have won the Grey Cup championship fourteen times (including a three-peat between 1954 and 1956 and an unmatched five consecutive wins between 1978 and 1982), most recently in 2015. The team has a rivalry with the Calgary Stampeders and is one of the three community-owned teams currently operating in the CFL.

Nickname
Elks - After soliciting suggestions for a new team name in November, the green-and-gold-clad team eventually winnowed the options down to seven, all beginning with the letter “E.” In February, those choices were reported to be Eagles, Eclipse, Elements, Elk, Elkhounds, Evergreens and Evergold. The team has long used “EE” as part of its branding.

The team said that, after the survey showed that Elk was preferred by fans, they also consulted with players, staff — and language experts at the University of Alberta, who suggested a minor tweak.