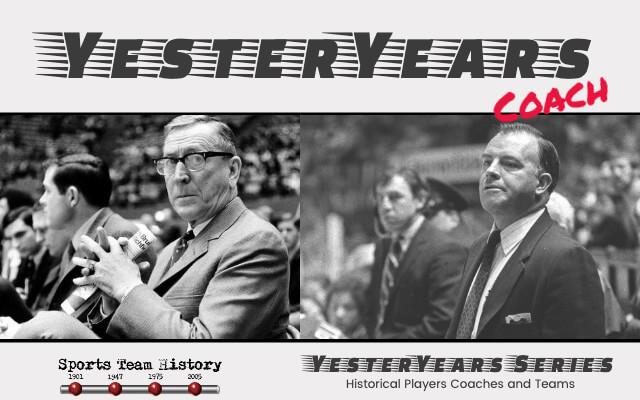 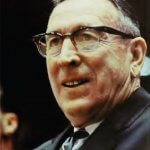 When admiring today’s basketball players, we should be aware of something: they carry the legacy of many talented coaches that came before them. These coaches have inspired their stamina, commitment to training, and innovation in technique. John Wooden is a legend in that aspect. He kept inspiring basketball legends and fans not only through his play but through coaching and books as well.

Wooden earned the national coach of the year title with the Henry Iba Award seven times. His teams achieved another record: they won 88 consecutive games in the National Collegiate Athletic Association. He was known for his elegant, yet persistent style of play that led to many scores.

Many fans claim that Wooden was the greatest NCAA head coach in history.

Early Years: How It All Started

To understand where Wooden’s talent as a coach came from, we should look at his early encounters with the game.

John Wooden was born in Hall, Indiana in October 1910. His home was a humble farm that had no electricity. John had to wake up in the early hours every morning to complete a few tasks before heading to school (one of them was milking the cows).

This simple fact from his early days tells us a lot about his character. He was taught to work hard without complaining. That’s what he asked from his players throughout his coaching career: train hard with no complaining.

Wooden engaged in different sports activities during his childhood, but basketball was his favorite one.

From 1928 to 1932, John studied at Purdue University, with English as his major. The famous Ward “Piggy” Lambert was his coach. He immediately recognized his talent. This was the coach that made a big difference in Wooden’s life. He got inspired to work on his stamina and commitment, without losing his love for the game. It’s the character that established his productive coaching career later on.

Wooden’s Career as a Coach

After graduating with a degree in English in 1932, Wooden started his impressive career as a player. 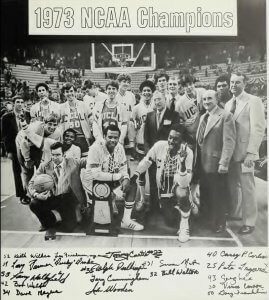 Unfortunately, this stage of his development was interrupted by World War 2. Wooden put basketball on a break to join the Navy for two years. After the war, he immediately started working as a coach and athletic director at Indiana State Teachers College. He took the opportunity to combine his work with studies, so he earned an MA degree in education during his years in Indiana. Once his basketball team won the state intercollegiate championship, the coach got an invitation from the NAIB, which he refused. He didn’t agree with NAIB’s policy to ban black players from the game. That earned Wooden even more respect among players and fans.

From Wooden’s example, we see that having access to fancy training facilities and clubs for children is not detrimental. It’s all about that inner drive that makes people work harder towards a goal.

Can we say the same thing for today’s college basketball players? They have access to greater comfort when compared to those of the past. But the workload is much greater. They aren’t able to focus on the game so much since their professors constantly demand assignments and schedule exams. Each essay has to be original, so they rely on an originality check by Edubirdie. After completing challenging projects, the professors think of new assignments to impose. Students often complain that they don’t have enough time to focus on the game. The system is changing, so they have to be more resilient and hard-working than ever. We can learn from Wooden’s example; that’s for sure!

His commitment to basketball led him to the final destination in his career: coaching at UCLA. He started working in substandard facilities, but he took his team to massive success. With his UCLA team, Wooden won 88 consecutive games, 38 straight NCAA tournaments, and 10 national championships.

John Wooden’s Coaching Style: What Made Him Special?

What made the coach so successful during his time training the UCLA team? Through his books, he gave us a glimpse into his personality and coaching philosophy. It was shaped by his early experiences, as well as his time serving in the war. His father’s lessons were the very foundation of his persistency. These were the principles that made John Wooden:

Ever since Wooden started working as a coach, he aimed to find meaning in his work. He knew how he affected others, and he used that authority well.

His fans are often wondering: can such a man be strict enough to fairly discipline his players? Yes! Wooden did not like yelling and punishment. His most drastic discipline measure was to deny his players practice, which was considered their privilege.

He was also strict with his requirements. His players had to be punctual, and they had to end their practices in full stamina. He demanded them to be clean and neat; that’s the legacy he brought from his years in the Navy.

Discipline and Patience – The Secret to Wooden’s Success

John Wooden wrote several books describing his career and the passion behind it. Coach Wooden’s Pyramid of Success is one of the most popular ones. In it, the legendary coach reveals the building blocks of his results: confidence, hard work, teamwork, and faith.

His amazing personality will continue motivating basketball players long after his death. We have his books and the countless anecdotes that were passed on by those who were lucky to train under his guidance.

BIO: Judy loves two things: basketball and writing. She doesn’t only watch the game; she explores its history and shares her impressions with the readers on her blog. Since Judy doesn’t play, she spends a lot of time reading and writing about basketball. Does that define her as a hard-core fan?