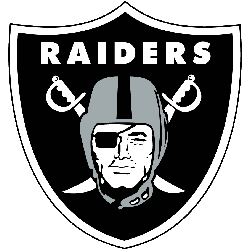 Originally based in Oakland, California, the team departed Oakland to play in Los Angeles from the 1982 season through the 1994 season before returning to Oakland at the start of the 1995 season. On March 27, 2017, NFL team owners voted nearly unanimously to approve the Raiders' application to relocate to Las Vegas. Nearly three years later, on January 22, 2020, the Raiders officially moved to Las Vegas.

Nickname
Raiders - Carry over from the Oakland and Los Angeles teams. Chet Soda, Oakland’s first general manager, sponsored a name-the-team contest in 1960. Helen A. Davis, an Oakland policewoman, submitted the winning entry, Señors, and was rewarded with a trip to the Bahamas. The nickname, an allusion to the old Spanish settlers of northern California, was ridiculed in the weeks that followed, and fans also claimed that the contest was fixed. Scotty Stirling, a sportswriter for the Oakland Tribune who would later become the team’s general manager, provided another reason to abandon the nickname. “That’s no good,” Stirling said. “We don’t have the accent mark for the n in our headline type.” Responding to the backlash, Soda and the team’s other investors decided to change the team’s nickname to Raiders, which was a finalist in the contest along with Lakers.

Who is the greatest Las Vegas Raiders?