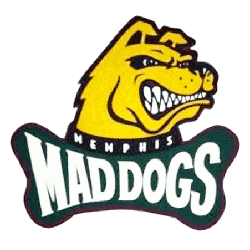 The Memphis Mad Dogs were a Canadian football team that played the 1995 season in the Canadian Football League. The Mad Dogs were part of a failed attempt to expand the CFL into the United States.

Nickname
Mad Dogs - Prior to the Mad Dogs, Smith fronted an ownership group (along with such entities as former Memphis Showboats owner William Dunavant and the estate of Elvis Presley) that tried to get a National Football League team into Memphis in 1993. The Memphis Hound Dogs, as the proposed team was to be called, was one of five teams to be considered, but was passed over in favor of the Carolina Panthers and Jacksonville Jaguars. With Presley's estate no longer involved, the team eschewed "Hound Dogs" in favor of "Mad Dogs," ostensibly through a name-the-team contest.

Who is the greatest Memphis Mad Dogs?