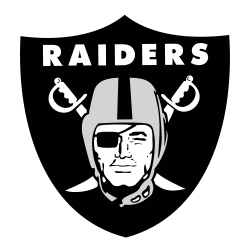 The Oakland Raiders are a professional American football franchise based in Oakland, California. The team commenced operations in 1960 as a member of the American Football League (AFL); they are currently members of the National Football League (NFL), which merged with the AFL in 1970. The Raiders currently belong to the Western Division of the NFL's American Football Conference and play their home games at the Oakland–Alameda County Coliseum.

Nickname
Raiders - Chet Soda, Oakland’s first general manager, sponsored a name-the-team contest in 1960. Helen A. Davis, an Oakland policewoman, submitted the winning entry, Señors, and was rewarded with a trip to the Bahamas. The nickname, an allusion to the old Spanish settlers of northern California, was ridiculed in the weeks that followed, and fans also claimed that the contest was fixed. Scotty Stirling, a sportswriter for the Oakland Tribune who would later become the team’s general manager, provided another reason to abandon the nickname. “That’s no good,” Stirling said. “We don’t have the accent mark for the n in our headline type.” Responding to the backlash, Soda and the team’s other investors decided to change the team’s nickname to Raiders, which was a finalist in the contest along with Lakers.

Who is the greatest Oakland Raiders?