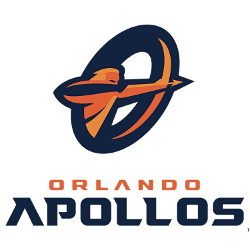 The Orlando Apollos was a professional American football team based in Orlando, Florida and are charter members of the Alliance of American Football. The Apollos were the 1st of 8 teams announced for the new league, which is set to play in February 2019.

On April 7, 2018, Orlando was announced as the first Alliance team along with its coach, Steve Spurrier. On September 20, the league announced four inaugural eastern franchises' names and logos including the Orlando Apollos. On December 4, 2018, the team and iHeart Media announced its broadcasting arrangements.

On February 20, 2019, the league announced that due to Florida worker's compensation laws, the Apollos had moved its practices to Camden County High School in Kingsland, Georgia, with players being housed at hotels in Jacksonville, Florida, and commuting to home games in Orlando. The AAF was unable to secure a league-wide insurance plan prior to the start of the season, and while the state of Georgia will arrange worker's compensation insurance for any business, including professional sports where the majority of practices are held in the state, Florida does not classify professional athletes as employees.

The Apollos began to play on February 9, winning their first game in blowout fashion, defeating the Atlanta Legends at Spectrum Stadium, 40–6. They would follow the opening win up with another high-scoring effort on the road, defeating the San Antonio Commanders, 37–29. They would win their first five games and were the AAF's last undefeated team in the inaugural season before losing to the Arizona Hotshots on March 16, 22–17. However, they bounced back the next week by beating the Atlanta Legends, 36–6, to become the first team in the inaugural season to qualify for the playoffs.

After the league’s suspension of football operations, head coach Spurrier, by virtue of the team's league-leading record, stated, "we’ve got to be the champs, right?" FanDuel Sportsbook declared the Apollos "honorary champions," while paying out futures bets placed on all AAF teams.

Nickname
Apollos – The sun doesn’t set on football in early February anymore. Inspired by Apollo, the Greek god of sun, The sunshine state’s new professional football franchise is a glowing testament to the power, imagery and energy made possible by the sun.