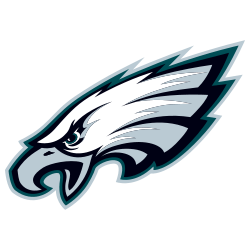 History of the Eagles

The franchise was established in 1933 as a replacement for the bankrupt Frankford Yellow Jackets when a group led by Bert Bell secured the rights to an NFL franchise in Philadelphia. Bell, Chuck Bednarik, Bob Brown, Reggie White, Steve Van Buren, Tommy McDonald, Greasy Neale, Pete Pihos, Sonny Jurgensen, and Norm Van Brocklin have been inducted into the Pro Football Hall of Fame.

Since their formation, the Eagles have appeared in the playoffs 27 times, won 14 division titles (11 in the NFC East), appeared in four pre-merger NFL Championship Games, winning three of them (1948, 1949, and 1960), and appeared in three Super Bowls, winning Super Bowl LII at the end of the 2017 season.

Nickname
Eagles - In 1933, Bert Bell and Lud Wray purchased the bankrupt Frankford Yellowjackets. When Bert Bell established his NFL franchise in Philadelphia in 1933, the country was struggling to recover from the Great Depression. New president Franklin D. Roosevelt had introduced his “New Deal” program through the National Recovery Administration, which had the Eagle as its symbol. Since Bell hoped his franchise also was headed for a new deal, he picked Eagles as the team name.

Who is the greatest Philadelphia Eagles?