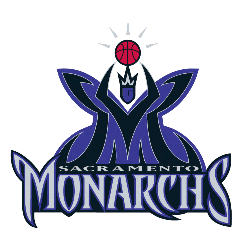 The Sacramento Monarchs were a basketball team based in Sacramento, California. They played in the Women’s National Basketball Association (WNBA) from 1997 until folding on November 20, 2009. They played their home games at ARCO Arena.

The Monarchs were one of the WNBA’s eight original franchises and were noted early on for standout players Ticha Penicheiro, Ruthie Bolton and Yolanda Griffith. They were the sister franchise of the Sacramento Kings National Basketball Association (NBA) team. They were one of the more successful WNBA franchises on the court, though they often trailed behind perennial Western Conference champions the Houston Comets and the Los Angeles Sparks. However, in 2005, the team brought Sacramento its third championship in a professional sport (the Sacramento Knights won an indoor soccer championship in 1999 and the Sacramento Surge won the WLAF World Bowl in 1992), winning the WNBA Finals for the only time.

Nickname
Monarchs – The Monarchs was the sister team to the NBA Sacramento Kings and keeping with the royalty theme with kings and monarchs.

Who is the greatest Sacramento Monarchs?