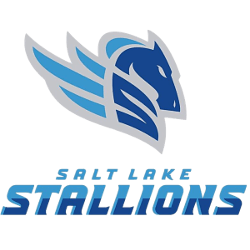 The Salt Lake Stallions are a professional American football team based in Salt Lake City and are charter members of the Alliance of American Football. The Legends were the 4th of 8 teams announced for the new league, which is set to play in February 2019.

The Alliance Salt Lake City charter franchise was announced to play at Rice–Eccles Stadium by the Alliance of American Football on May 14, 2018. Dennis Erickson was named by the league as head coach on May 16, 2018. Randy Mueller was named general manager by September 25, 2018.

The western four teams’ names and logos were revealed on September 25, 2018, with Salt Lake as the Stallions with the colors of blue, deep sky blue and silver. The name is inspired by the land speed records set at the Bonneville Salt Flats, while the colors represent aspects of Utah’s geography like the Great Salt Lake and the Wasatch Range.

Nickname
Stallions – “The name Stallions honors the spirit of the region and the rumbling presence of horsepower, inspired by Utah’s famed Bonneville Salt Flats, where world land speed records have have been set and broken for decades,” Salt Lake coach Dennis Erickson said in a team statement.