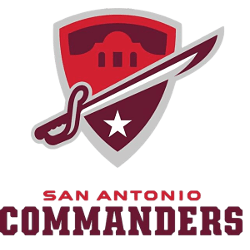 The San Antonio Commanders are a professional American football team based in San Antonio, Texas and are charter members of the Alliance of American Football. The Commanders were the 8th of 8 teams announced for the new league, which is set to play in February 2019.

The Alliance San Antonio charter team of the Alliance of American Football spring league was announced on June 21, 2018. Also, the league announced former San Diego Chargers coach Mike Riley as head coach and former Dallas Cowboys fullback Daryl Johnston serves as General Manager of the team. The western four teams' names and logos were revealed on September 25 with San Antonio as the Commanders. The name is a tribute to San Antonio's military history, with maroon and silver representing the city and the small swords carried by military officers, respectively.

The Commanders, who drew an average of approximately 27,720 fans to each home game, were by far the best-attended team in the AAF.

Nickname
Commanders – which has had more than three centuries of military presence with one of the nation’s largest active and retired military populations, the nickname honors those who serve. Team colors feature maroon, which is used in the official city logo; silver, in reference to dress military swords carried by officers; and the familiar red of the Texas state flag. The logo includes a depiction of the Alamo.