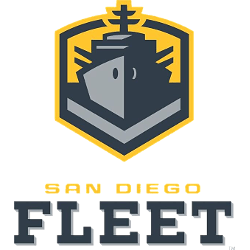 The San Diego Fleet is a professional American football team based in San Diego, California and was charter members of the Alliance of American Football. The Fleet was the 6th of 8 teams announced for the new league, which is set to play in February 2019.

The Alliance San Diego team and head coach, Mike Martz, was announced by the Alliance of American Football on May 29, 2018. Early reports had Rick Neuheisel coaching the team before he instead agreed to take the coaching job in Phoenix. Alliance San Diego's name, logo, and colors were revealed on September 25, 2018, as the San Diego Fleet (battleship gray, yellow and silver gray) along with the other three western teams. The name indicates the city's ties to the United States Navy.

The Fleet held the first-overall pick in the league's 2019 AAF QB Draft, which was used to protect Josh Johnson. Johnson, who signed with the NFL's Washington Redskins before the end of the 2018 season, never played for the Fleet. The final 52-man roster was set on January 30.

Dre Bly, who had played cornerback for Martz with the St. Louis Rams, was originally slated to coach defensive backs but stepped down to take a similar position at the University of North Carolina. Former NFL quarterback Jon Kitna was also announced as the team's offensive coordinator in June 2018. However, he did not coach a game for the Fleet as he was hired by the Dallas Cowboys in January 2019 to become their quarterback's coach.

The team's first game was a loss at the Alamodome against the San Antonio Commanders on Saturday, February 9, 2019, with the game broadcast live on CBS. The Fleet won its first three home games before enthusiastic crowds and was third in attendance among the eight-team league.

On April 2, 2019, the Alliance for American Football suspended football operations, and on April 4 the league allowed players to leave their contracts to sign with NFL teams. The effect was to cancel the final two regular season games and the scheduled post-season playoffs. The Fleet athletes and coaches, who were in Orlando getting ready for a game against the Orlando Apollos, suddenly "found themselves paying their own hotel bills and buying their own plane tickets home."

The AAF closed down operation on April 2, 2019, and Fleet finished with a record of 3 wins and 5 losses. The Fleet finished tied for 3rd place of the Western Conference.

The team colors will be unique to professional sports — battleship gray, yellow and silver gray. They were chosen to represent the anthracite grey of the U.S. Navy’s Pacific fleet, the battleship gray of the ships, and “sun yellow of San Diego’s endless sunshine,” according to Fitz Ollison, the Alliance of American Football’s vice president – football communications.