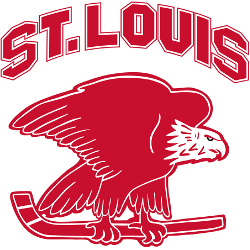 History of the Eagles

The St. Louis Eagles were a professional ice hockey team that played in the National Hockey League (NHL). Based in St. Louis, Missouri, the Eagles played for only one year, the 1934 – 1935 NHL season.

The team was founded in 1883 as the Ottawa Senators, a successful independent team that joined the NHL as a charter member in 1917. From the mid-1920s onward, they endured financial strain caused, in part, by being in the NHL’s smallest market. The financial problems forced the Senators to suspend operations for the 1931 – 1932 season. Upon their return to play, having sold their better players in an effort to raise funds, the Senators finished in last place for two straight seasons and continued to lose money. Following the repeat last place finish, the team decided that it could not survive in Ottawa and hoped to move to a bigger market.

In an attempt to recoup losses and pay outstanding debts, the Senators moved the NHL franchise to St. Louis, where it was nicknamed the Eagles. However, the team continued to lose money because of its travel expenses, and it was forced to sell players to other teams to meet its financial obligations.

After the season, the owners asked the NHL for a second time for permission to suspend operations. This time, the NHL refused the request. Instead, the league bought back the franchise, halted its operations, and dispersed its players among the remaining teams.

Nickname
Eagles – The club was renamed the Eagles, inspired by the logo of the Anheuser-Busch brewing company, which was founded in St. Louis.