Cristiano Ronaldo is among the best soccer players in the world. He is considered by many people as the super soccer player of all time. He was born on 5 February 1985. Furthermore, he is the captain of the Portugal national team and participates as a forward for Serie A club Juventus. In addition, he has won numerous awards including 5 Ballon d'Or awards and four European Golden Shoes. 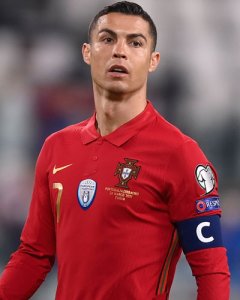 The super footballer (Ronaldo) was born and raised in Funchal, Madeira, Portugal, on a small island off the western coast of the country. His mother did manual jobs such as cooking and cleaning for pay, in order to sustain the family. Additionally, his father was an equipment manager at a boy's club where he introduced him to football. Ronaldo had always been a keen footballer, but at 14 years of age, Ronaldo had decided to invest in becoming a professional footballer. By that time, he was expelled from school after trying to harm his teacher.

Ronaldo started his football profession by playing for Sporting CP. In 2003, at the age of 18, he underwent an agreement with Manchester United worth £15 million. He was the first Portuguese player to be part of the English club. In his first season at the club, he won the FA Cup. He further led the club in winning three Premier League titles, the Champions League, and the Club World Cup. At the age of 23, Ronaldo won his first Ballon d'Or. In 2009, he signed for Real Madrid. Consequently, he won 15 trophies including two La Liga titles and four Champions League titles. In addition, Ronaldo won four Ballon d'Ors between the years 2013 and 2017. Moreover, Ronaldo has won two series A titles, two Supercopa Italiana and a Coppa Italia.

Ronaldo's Legacy Outside Of Football

Cristiano is one of the world's most known and in-demand athletes. He has a record of sponsorship deals he has signed for consumer products. The consumer products include sportswear, financial services, soft drinks, clothing, electronics, and computer video games. He has also established his presence on social media pages. In fact, he is the most famous sportsperson with over 500 million followers as of February 2021.

His life has been the subject of several works including an autobiography entitled, Moments. Not only that, but he has opened fashion boutiques, and also built a museum in his hometown. The museum houses trophies and memorabilia of his life and playing career.

Furthermore, he has made contributions to various charitable organizations throughout his career. For instance, he raised funds for rehabilitation and reconstruction after the 2009 earthquake in Indonesia. He contributed towards building a cancer center in a hospital in Madeira.

Finally, with the remarkable achievements above, it is clear Ronaldo would have hanged up his boots by now. After a long game of cheering on this super footballer, don't forget to try your luck in the best slots at Platincasino. Like him, some of the best games can be found right here.

His quest for more titles and accolades is far from over. In fact, he keeps improving and working hard towards greater goals. This five-time Ballon d'Or winner will probably go down as one of the greatest players who ever lived.

The Land of 10,000 Lakes, The Lakers 17 NBA Championship History

The Top 10 Best NHL Players of All Time