The Premier League has hosted some of the best players in the history of European soccer, including Thierry Henry, Alan Shearer, Steven Gerrard, Frank Lampard, and Cristiano Ronaldo. But there are also many top players that you won’t find on “best ever” lists and yet they have made just as much of an impact.

As you look forward to another round of EPL fixtures and prepare that BetMGM bonus code for some upcoming sportsbook action, be sure to remember the greats that made this league what it is, even though most young fans have never heard of them. Wiki is a FANDOM

If you ask an EPL fan under the age of 20 to name the best left-back in the history of the Premier League, they’ll probably point to Andy Robertson, Leighton Baines, or even Ashley Cole (the latter of which is definitely worthy of that title). But many old-school fans and players will tell you that Denis Irwin was the league’s greatest left-back.

The Irishman was known as “Mr. Dependable” and played 529 times for Manchester United, helping them through their most productive period. According to Peter Schmeichel, Irwin would be the “first guy” on his team sheet if he was asked to pick his best all-time team.

Beattie was a clinical finisher who bagged a total of 91 goals and 37 assists during his time in the Premier League. He played at the same time as some of the best strikers in the world, so he’s not always remembered as well as he should be, but his record speaks for itself.

In the 2002/03 season, Beattie finished as the third-highest scorer, behind Henry and Van Nistelrooy, and he did that while playing for a Southampton team that finished 8th. 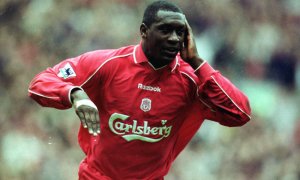 Heskey became somewhat of a meme during the final years of his career. His lack of pace let him down a little and he wasn’t as clinical as he once was, but during his peak, Heskey was a reliable and unselfish target man.

He netted 111 times in the Premier League and also assisted 40 goals. He was a consistent threat for Leicester and Liverpool and also played for Wigan, Aston Villa, and Birmingham. His goalscoring record doesn’t look great when viewed today, but he was more than just a finisher.

Robert is rarely mentioned on lists of the best free-kick takers in EPL history. In fact, we found several lists of “most free-kick goals” that included players with between 5 and 18 goals and neglected to mention Robert.

He seems to have been forgotten, even though the Newcastle man netted 11 free-kick goals during his career. This means that he has a free-kick goal-to-game ratio of 0.073, better than anyone else in the history of the Premier League (including all those with 9 or more goals). It’s nearly 5x more than Frank Lampard and even surpasses David Beckham, who sits in second with a ratio of 0.068.

Robert assisted or scored approximately every 2.5 games and was always a significant threat in and around the box.

The history of the EPL will be written by the likes of Ronaldo, Henry, Beckham, and Giggs, but as the above list shows, there are dozens—if not hundreds—of superstars who also deserve their piece of history.