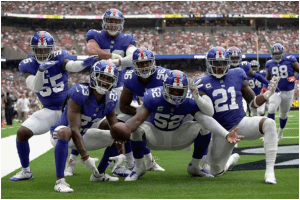 The New York Giants history, which is an American football team that as of now plays in the NFL's National Football League is extremely rich. One of the most legendary teams in pro football in the USA, the New York Giants is among the earliest teams that were formed during the inception of the National Football League. The iconic sports enthusiast and impresario Late Tim Mara (Pro Football Hall of Fame inductee) was instrumental in the creation of the team through a $500 investment in 1925. Later to keep things running smoothly he invested a major sum of $25,000 to keep the franchise afloat. This was the first pro football team in the State of New York. For a nascent NFL that was in dire need of publicity and attendance, having a team in the most famous city in the country was a necessity.

When the Giants along with 4 more teams signed up with the NFL, the league was just 5 years old. The choice of New York hosting a local professional football team was considered unique at the time. The reason was most teams were found in mid and small-sized towns and cities across the USA. These included locations like Buffalo, Muncie, Akron, Portsmouth, Canton, and Rock Island. Most of them were found in and around Ohio, which is the reason why the Pro Football Hall of Fame is in Canton. 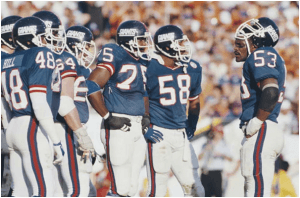 For all his untiring efforts and personal investment, Tim Mara almost faced bankruptcy. The New York Giants lost three consecutive games before their fortune soared and they ended the season at the top at 8-4. Being based in New York city worked wonders for the team with more than 70,000 spectators flocking to the Polo Grounds in December of the first season. The Giants took on the Chicago Bears that had just recruited the greatest pro football legend of the decade, Red Grange.

For the next 1926 season. Grange and his manager decided to go out on their own and created the American Football League with the Yankees becoming their star team. This was to rival the Giants although it proved to be a futile effort as the Giants and The NFL emerged victorious, with the AFL winding up within 12 months only.

The Giants shone in the third season (1927) when they lifted their first championship title of the NFL with their defense led by Steve Owen (tackle) scoring a record low of 20 points in 13 matches. Later in 1930, he became the coach of the team going on to keep his position for 23 seasons with a sterling 153-108-17 record. Steve Owen is ninth on the list of greatest pro football coaches. The Giants achieved a string of successes under the stewardship of Owen. It started with the 1933 divisional play, where they went on to win 8 division titles playing in 14 seasons. They were NFL champions in 1934 and 1938. Two of the most outstanding players through the 30s and 40s were center-linebacker Mel Hein and triple-threat halfback Ken Strong.

In the latter part of the 1950s, under coach Jim Lee Howell and later coach Allie Sherman in the following decade, the Giants took home the NFL trophy in 1956 and eight NFL Eastern titles from 1956 to 1963. Pro football stalwarts of the likes of Andy Robustelli, Frank Gifford, Y.A. Tittle, Emlen Tunnell, and Roosevelt Brown were key players in their title chases during these years. However, there was a drought of titles for the period 1964 – 1985 when the Giants did not win a single championship. It was under the guidance of Bill Parcells that they finally regained their winning touch by lifting the NFC Eastern division titles in 1986, 1989, and 1990. During the 1986 and 1990 championships they had impressive triumphs in the Super Bowl XXI (against Denver Broncos) and Super Bowl XXV (Vs Buffalo Bills). 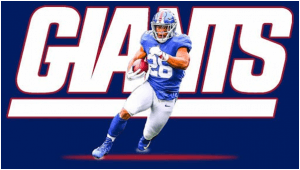 The New York Giants have always been a family affair from its early days. While Tim Mara founded the enterprise, it was his sons Jack and Wellington that succeeded him. Later Tim Mara II was on board as the VP of the club for a very long while. Preston Robert Tisch and Wellington Mara who invested in 50% of the enterprise were co-chief executives until their deaths.

The New York Giants in 2007, were led by star players like quarterback Eli Manning and defensive end Michael Strahan that managed to defeat the unvanquished New England Patriots and claim the Super Bowl XLII crown. Just four years later the Giants with Manning clinched the second Super Bowl XLVI championship in a final playoff against the New England Patriots. All through their history, the Giants have featured 29 Hall of Fame players. According to Forbes, the value of the New York Giants is at around $4.3 billion. The team is one of the oldest NFL teams.