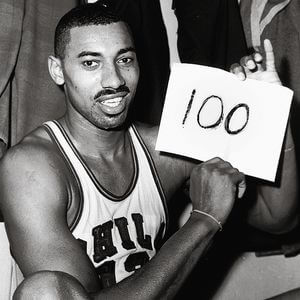 Wilt Chamberlain set the single-game scoring record in the National Basketball Association (NBA) by scoring 100 points for the Philadelphia Warriors in a 169–147 win over the New York Knicks on March 2, 1962, at Hershey Sports Arena in Hershey, Pennsylvania. It is widely considered one of the greatest records in basketball. Chamberlain set five other league records that game including most free throws made, a notable achievement, as he was regarded as a poor free-throw shooter. The teams broke the record for most combined points in a game (316). That season, Chamberlain averaged a record 50.4 points per game, and he had broken the NBA single-game scoring record (71) earlier in the season in December with 78 points. The third-year center had already set season scoring records in his first two seasons. In the fourth quarter, the Knicks began fouling other players to keep the ball away from Chamberlain, and they also became deliberate on offense to reduce the number of possessions for Philadelphia. The Warriors countered by committing fouls of their own to get the ball back.

The game was not televised, and no video footage of the game has been recovered; there are only audio recordings of the game’s fourth quarter. The NBA was not yet a major sports league and struggled to compete against college basketball. The attendance at this game was around half of capacity, and there were no members of the New York press at the game.