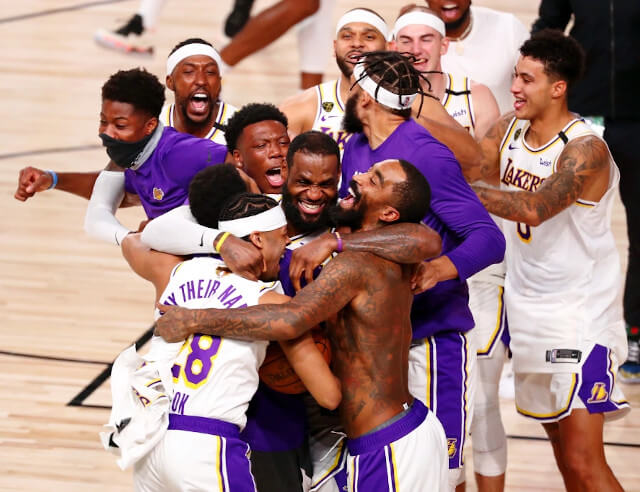 The 2020 NBA Finals was the championship series of the National Basketball Association (NBA)’s 2019–20 season and conclusion of the season’s playoffs. In this best-of-seven playoff series, the Western Conference champion Los Angeles Lakers defeated the Eastern Conference champion Miami Heat, 4–2, winning their first NBA championship in ten years. It was the franchise’s 17th title, tying the Boston Celtics for the most in the league’s history. The Lakers’ LeBron James was named the NBA Finals Most Valuable Player (MVP) for the fourth time in his career. He became the first player in league history to be named Finals MVP with three different franchises.

The Lakers were the No. 1 seed in the West, while the Heat was No. 5 in the East, becoming the third-lowest seed to advance to the Finals. This was the first NBA Finals matchup between the two teams and the first time that Finals participants had both missed the playoffs in the previous season. James had previously played with Miami under Heat head coach Erik Spoelstra, winning back-to-back NBA titles in 2012 and 2013 in four consecutive Finals appearances from 2011 to 2014, while Heat president Pat Riley was head coach of the “Showtime”-era Lakers from 1981 to 1990 leading them to four NBA titles in seven Finals appearances. For the first time in six seasons, the Golden State Warriors were not in the Finals.

The Finals were originally scheduled to begin on June 4 and end on June 24, but the season was suspended on March 11 due to the COVID-19 pandemic. The NBA and its players later approved a plan to restart the season in late July, setting up the NBA Bubble at Walt Disney World to protect teams from the virus. The games were played behind closed doors in the Bubble at the ESPN Wide World of Sports Complex in Bay Lake, Florida, with the Finals being played from September 30 through October 11. This year’s Finals were the latest to begin (beating the 2014 edition which began on June 5) and the first one played in September and October.