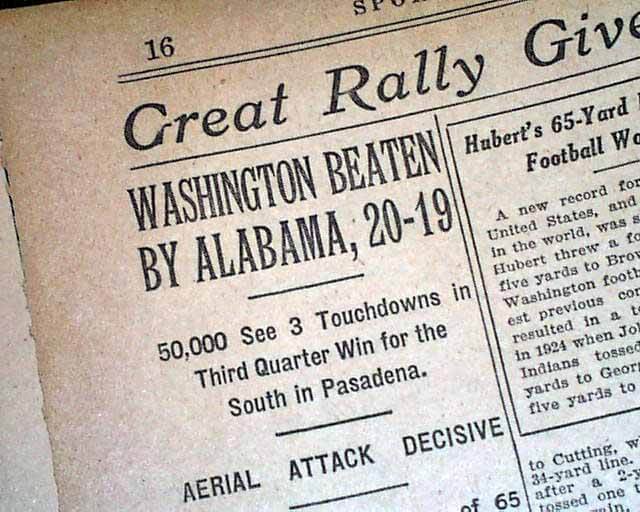 The 1926 Rose Bowl pairing of Alabama and Washington later became the subject of a television documentary, Roses of Crimson, and hailed as “the football game that changed the South”. Alabama was the first Southern football team to be invited to play in the Rose Bowl and proved that the Southern teams could compete with those from the East, the Midwest, and the West Coast. George Wilson helped the Huskies take a 12-0 lead at halftime, but both extra-point attempts failed, and Wilson was injured. In the third quarter, Alabama exploded for three touchdowns, starting with quarterback Pooley Hubert’s run to make the score 12-7. Washington lost the ball on its 35-yard line, and Johnny Mack Brown carried the ball over to make the score 14-12 in favor of Alabama. A 61-yard pass from Hubert to Brown set up Alabama’s third score for a 20-12 lead. George Wilson returned in the fourth quarter, and the Huskies scored a touchdown and the point after to close the score to 20-19, but the missed conversion attempts from the first half cost them the game. The victory for Coach Wallace Wade established Alabama as a football powerhouse.