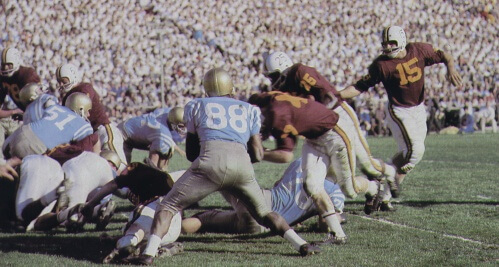 The 1960 Minnesota Golden Gophers football team represented the University of Minnesota in the 1960 Big Ten Conference football season. In their seventh year under head coach Murray Warmath, the Golden Gophers compiled an 8–2 record and outscored their opponents by a combined total of 228 to 88.

The team was selected national champion by four NCAA-designated major selectors in Associated Press, Football News, National Football Foundation, and UPI/coaches with some selections made prior to the Gophers’ loss to Washington in the 1961 Rose Bowl. The University of Missouri beat 3 nationally ranked teams and finished 11-0 under Dan Devine. They were selected as National Champion by https://en.wikipedia.org/wiki/Poling_System. Both Minnesota and Ole Miss were consensus national champions.