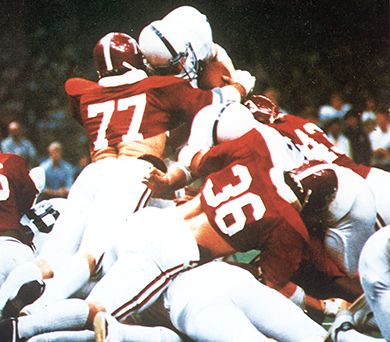 The 1979 Alabama Crimson Tide football team (variously “Alabama”, “UA” or “Bama”) represented the University of Alabama in the 1979 NCAA Division I-A football season. It was the Crimson Tide’s 85th overall and 46th season as a member of the Southeastern Conference (SEC). The team was led by head coach Bear Bryant, in his 22nd year, and played their home games at Bryant–Denny Stadium in Tuscaloosa and Legion Field in Birmingham, Alabama. They finished the season undefeated (12–0 overall, 6–0 in the SEC) and with a victory over Arkansas in the Sugar Bowl. For their collective efforts, the Crimson Tide were recognized as consensus national champions for the 1979 season.

In 1979 the Alabama Crimson Tide capped off a decade of remarkable success with the program’s seventh perfect season in college history after 1925, 1930, 1934, 1945, 1961, and 1966 (discounting the 1897 “season” in which Bama played and won only one game). The Tide defense recorded five shutouts and allowed only two teams to score in double digits. The offense scored thirty points or more seven times.

Despite this dominance, Alabama had three close calls. Against Tennessee on October 20, Alabama fell behind 17–0 in the second quarter before rallying to win 27–17. Three weeks later, against LSU, all the Tide offense could scrape up was a single field goal, but it was enough to win 3–0. In the regular-season finale against Auburn, after leading 14–3 at half Alabama let Auburn take an 18–17 fourth-quarter lead before winning 25–18. The Auburn and Tennessee games were the only two times in the 1979 season that Alabama trailed. A 24–9 victory over Arkansas capped a 12–0 season and national championship, Alabama’s sixth wire service national title.