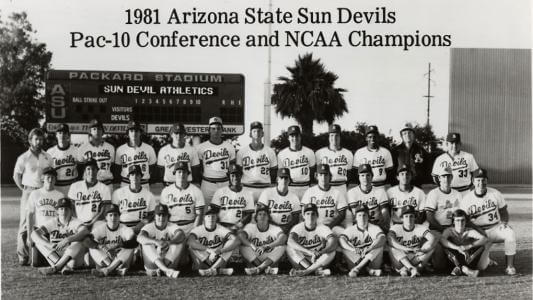 The 1981 NCAA Division I Baseball Tournament was played at the end of the 1981 NCAA Division I baseball season to determine the national champion of college baseball. The tournament concluded with eight teams competing in the College World Series, a double-elimination tournament in its thirty-fifth year. Eight regional competitions were held to determine the participants in the final event. Seven regions held a four-team, double-elimination tournament while one region included six teams, resulting in 34 teams participating in the tournament at the conclusion of their regular season, and in some cases, after a conference tournament. The thirty-fifth tournament’s champion was Arizona State coached by Jim Brock. The Most Outstanding Player was Stan Holmes of Arizona State.