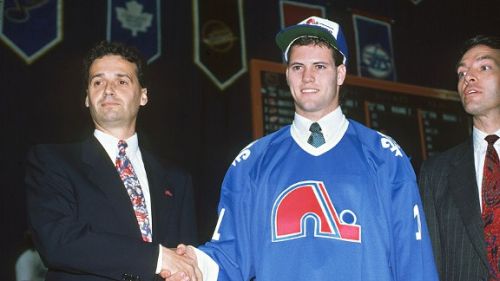 In 1991, the Nordiques once again had the first overall pick in the NHL Entry Draft. They picked junior star Eric Lindros, even though he had let it be known well in advance that he would never play for Quebec. Among the reasons, Lindros cited distance, lack of marketing potential, and having to speak French. After the Nordiques selected him anyway, Lindros then refused to wear the team jersey on Draft Day and only held it for press photographs. Lindros, on the advice of his mother Bonnie, refused to sign with the team and began a holdout that lasted over a year. The Nordiques president publicly announced that they would make Lindros the centerpiece of their franchise turnaround, and refused to trade Lindros, saying that he would not have a career in the NHL as long as he held out. Some of the Nordiques wanted to move on without Lindros, as Joe Sakic commented “We only want players here who have the passion to play the game. I’m tired of hearing that name. He’s not here and there are a lot of others in this locker room who really care about the game.” Meanwhile, the Nordiques finished with another dreadful season in 1991–92, missing the 70-point barrier for the fifth year in a row.

On June 30, 1992, after confusion over whether Quebec had traded Lindros’ rights to the Philadelphia Flyers or New York Rangers was settled by an arbitrator, the Nordiques sent Lindros to the Flyers in exchange for forwards Peter Forsberg and Mike Ricci, goaltender Ron Hextall, defencemen Steve Duchesne and Kerry Huffman, “future considerations” which eventually became enforcer Chris Simon, two first-round picks and $15 million. One of the draft picks was used by the Nordiques to select goaltender Jocelyn Thibault, the other was traded twice and ultimately used by the Washington Capitals to select Nolan Baumgartner.