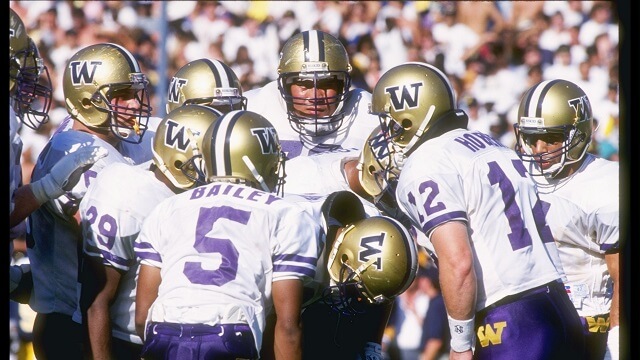 The 1991 Washington Huskies football team represented the University of Washington in the 1991 NCAA Division I-A football season. Head coach Don James, in his 17th season at Washington, was assisted by coordinators Keith Gilbertson (offense) and Jim Lambright (defense), both head coaches themselves within two years.

The 1991 team was arguably the finest team in school history and split the national championship with the Miami Hurricanes, who were also 12–0, and won the AP Poll by four votes, while Washington took the coaches’ poll by nine. Washington could not have played Miami in a bowl game because the Pac-10 champion was bound by contract to play in the Rose Bowl against the Big Ten champion. The Huskies soundly defeated no. 4 Michigan 34–14 in the 1992 Rose Bowl; the final score differential was narrowed by a late touchdown by Tyrone Wheatley of Michigan. With a minute remaining in the game, Washington was on the Michigan five-yard line but opted to stay on the ground and run out the clock with the third-string quarterback leading the offense.