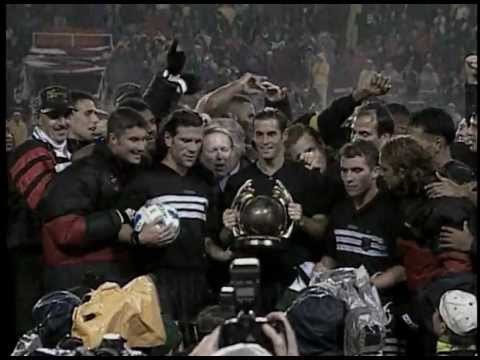 MLS Cup 1997 was the second edition of the MLS Cup, the post-season championship match of Major League Soccer (MLS) in the United States. It was played on October 26, 1997, between defending champion and hosts D.C. United and the Colorado Rapids to determine the champion of the 1997 season. The match was played in front of 57,431 spectators at Robert F. Kennedy Memorial Stadium in Washington, D.C.

During a rainstorm that mirrored the previous final, D.C. repeated as MLS Cup champions, winning the match 2–1 on goals by Jaime Moreno in the 37th minute and Tony Sanneh in the 68th minute. Substitute Adrián Paz scored a consolation goal for Colorado in the 75th minute, but the team was unable to draw level. 1997 final was the first MLS Cup to be decided in regular time and the first to be won by the host team. To date, this is the first and only championship game held in D.C. to be won by a D.C.-based professional team. The crowd of 57,431 was the second-largest soccer audience in the history of RFK Stadium. It was also the MLS Cup to feature two brothers on the same roster, as Chris Henderson and Sean Henderson both started the match for Colorado.

As finalists, D.C. United and the Colorado Rapids both earned a berth to play in the 1998 CONCACAF Champions’ Cup.