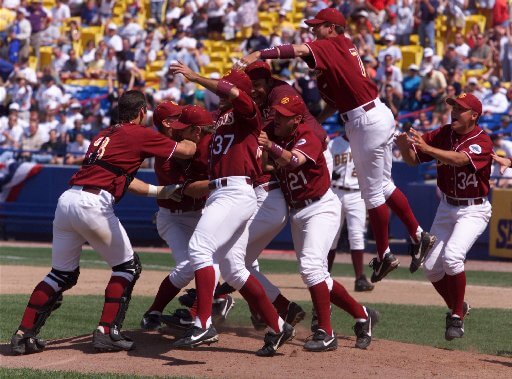 The 1998 CWS was infamous for producing several high-scoring games, which was termed by media covering the Series as “Gorilla Ball” (or “Geaux-rilla Ball” among LSU fans), which placed a premium on home runs. LSU, which won the 1996 and 1997 national championships and set an NCAA record in 1997 by hitting 188 home runs, hit eight home runs in its first game vs. USC, and added six more in its second game vs. Mississippi State to bring its season total to 157. Needing one victory to advance to the championship game for the third consecutive year, LSU fell twice to USC, failing to hit a home run in either game. USC and Pac-10 rival Arizona St. set numerous offensive records in the championship game, won by the Trojans 21–14.

Prior to the 1999 season, the NCAA adopted restrictions on aluminum bats, requiring the difference between the length and weight (“drop”) of the bat to be no more than three (e.g. a 34-inch bat could not weigh less than 31 ounces). This reduced home run output slightly, but it was not until more sweeping changes in 2011 before aluminum bats would perform more like their wood counterparts.