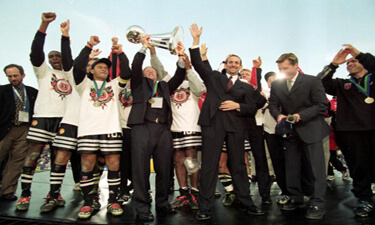 MLS Cup 1999 was the fourth edition of the MLS Cup, the championship match of Major League Soccer (MLS), which decided the champion of the 1999 season. It took place on November 21, 1999, at Foxboro Stadium in Foxborough, Massachusetts, and was contested by D.C. United and the Los Angeles Galaxy in a rematch of the inaugural final played at the same venue in 1996.

D.C. United defeated Los Angeles 2–0 with goals from Ben Olsen and Jaime Moreno during the first half. D.C. United captured their third MLS Cup victory in the first four years of Major League Soccer’s existence and second victory against the Galaxy in an MLS Cup. American referee Tim Weyland was selected to officiate the match. Christina Aguilera performed at the halftime show.