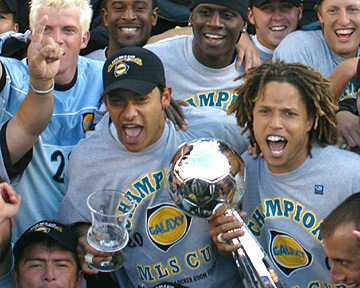 MLS Cup 2002 was the seventh edition of the MLS Cup, the championship match of Major League Soccer (MLS), which took place on October 20, 2002. It was hosted at Gillette Stadium in Foxborough, Massachusetts, and contested by the New England Revolution and the Los Angeles Galaxy to decide the champion of the 2002 season. The Revolution, who were named hosts before the season, were playing in their first MLS Cup; Los Angeles had lost in all three of their previous cup appearances.

Los Angeles won their first championship 1–0 in the second overtime on a sudden-death goal scored by Carlos Ruiz. The match was attended by 61,316 spectators, the largest figure for any MLS Cup until 2018. It was also the last MLS final to end with a golden goal.