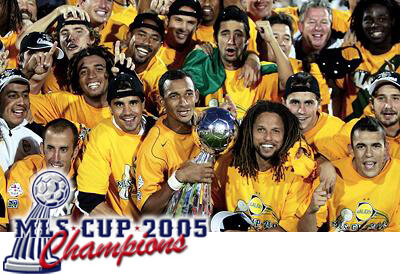 MLS Cup 2005 was the 10th edition of the MLS Cup, the championship match of Major League Soccer (MLS). The match took place on November 13, 2005, at Pizza Hut Park in Frisco, Texas, near Dallas, and was contested between the New England Revolution and the Los Angeles Galaxy. It was a rematch of MLS Cup 2002 and ended in a repeat victory for Los Angeles, who won 1–0 on a goal scored by Guillermo Ramírez in extra time.

New England qualified as the top seed in the Eastern Conference with several players named to the MLS Best XI, while Los Angeles was the lowest-seeded playoff team and had rebuilt its roster in the offseason. Ramírez, who was brought in on loan from CSD Municipal, had scored no goals from open play despite 62 shots but was substituted into the MLS Cup final and scored the winning goal.