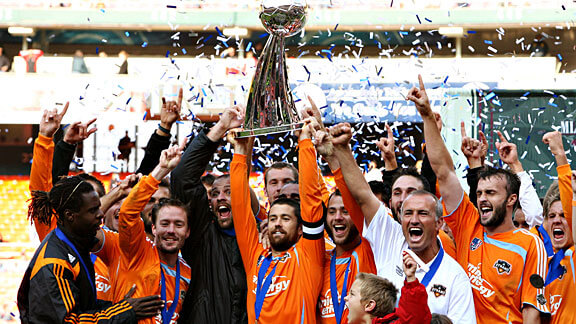 MLS Cup 2007 was the 12th edition of the MLS Cup, the post-season championship match of Major League Soccer (MLS) in the United States. It was played on November 18, 2007, at Robert F. Kennedy Memorial Stadium in Washington, D.C., between the New England Revolution and Houston Dynamo in a rematch of the previous edition. The match determined the championship of the 2007 season and was attended by 39,859 spectators.

Houston won the match 2–1 after falling behind on a Revolution goal scored by Taylor Twellman in the 20th minute. The Dynamo made a tactical change in the second half that yielded two goals from Joseph Ngwenya and Dwayne De Rosario, the latter of whom was named the match’s most valuable player. The Dynamo became the second team to win consecutive MLS Cups, while New England lost their third consecutive and fourth overall cup.