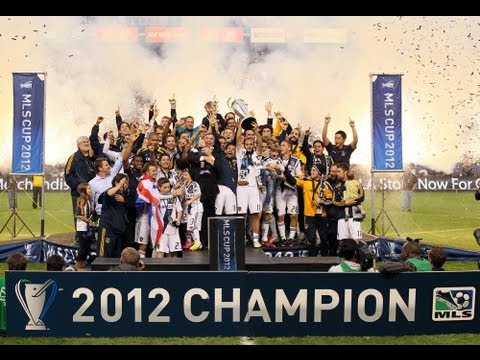 MLS Cup 2012, the 17th edition of Major League Soccer’s championship match, was a rematch between the Houston Dynamo and the Los Angeles Galaxy to decide the champion of the 2012 season. The match was played at the Home Depot Center in Carson, California on December 1, 2012. Los Angeles defeated Houston 3–1 giving the Galaxy their second-straight league title and their fourth overall.

Calen Carr lies injured as David Beckham look on during the 2012 MLS Cup.

For the first time in MLS Cup history, the championship was not held at a predetermined neutral site. Instead, the match venue was held in the home stadium of the finalist with the best regular-season record, in this case, The Home Depot Center (Los Angeles), which broke the MLS record for hosting the most MLS Cup matches (5) The game was a rematch of the 2011 MLS Cup, won 1–0 by the Galaxy.

As MLS Cup finalists, both Houston and Los Angeles qualified for the 2013–14 CONCACAF Champions League (champion in Pot A, runner-up in Pot B).