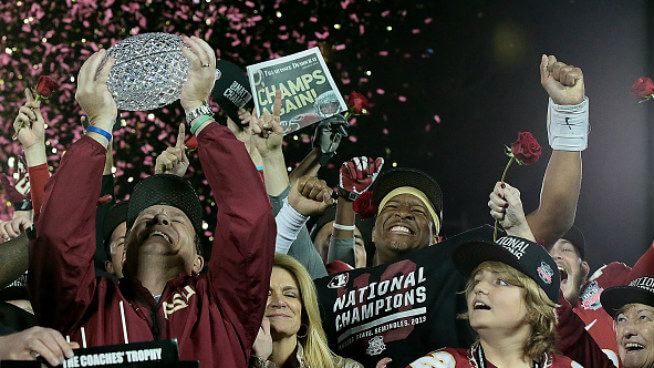 The 2013 Florida State Seminoles football team, variously Florida State or FSU, represented Florida State University in the sport of American football during the 2013 NCAA Division I FBS college football season. Florida State competed in the Football Bowl Subdivision (FBS) of the National Collegiate Athletic Association (NCAA). The Seminoles were led by fourth-year head coach Jimbo Fisher and played their home games at Bobby Bowden Field at Doak Campbell Stadium in Tallahassee, Florida. They were members of the Atlantic Coast Conference and played in the Atlantic Division. It was the Seminoles’ 22nd season as a member of the ACC and its ninth in the ACC Atlantic Division.

In addition to the Heisman, Jameis Winston won the Walter Camp Award, the Davey O’Brien Award, and the Manning Award as well as being a finalist for the Maxwell Award and honored as the AP Player of the Year. Roberto Aguayo won the Lou Groza Award as the nation’s best placekicker, Bryan Stork won the Rimington Trophy awarded to the nation’s top center. Ten players were named All-Americans, with three earning consensus honors. For their accomplishments, Lamarcus Joyner was a finalist for both the Jim Thorpe Award and the Nagurski Trophy, and Coach Fisher was named the AFCA Coach of the Year and was a semifinalist for Maxwell Coach of the Year.