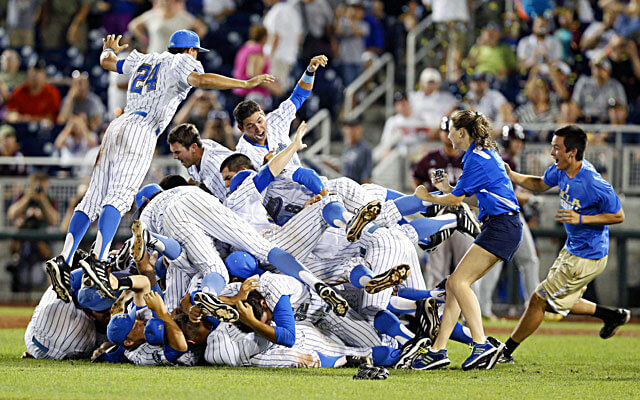 The 2013 NCAA Division I Baseball Tournament began on Friday, May 31, 2013, as part of the 2013 NCAA Division I baseball season. The 64 teams double-elimination tournament concluded with the 2013 College World Series in Omaha, Nebraska, which began on June 15 and ended with the final round on June 25. The UCLA Bruins swept the Mississippi State Bulldogs in a best of three series to win the NCAA National Championship, the university’s first in baseball and the 109th national title in all sports.

The 64 teams were divided into sixteen regionals consisting of four teams each. All four teams, in each regional, competed in a double-elimination tournament. Regional champions then faced one another in a best-of-three game series in their individual Super Regional based upon a predetermined bracketed system. This format determined the final eight participants to advance to the College World Series in Omaha, Nebraska.

Fourteen of the sixteen original Regional hosts advanced to their respective Super Regional; the exceptions were the #8 national seed Oregon Ducks and the Virginia Tech Hokies.

For the first time in television history, ESPN provided live cut-ins and highlights from all 16 Regionals with the new Bases Loaded platform — similar to ESPN Goal Line and Buzzer Beater for college football and basketball.