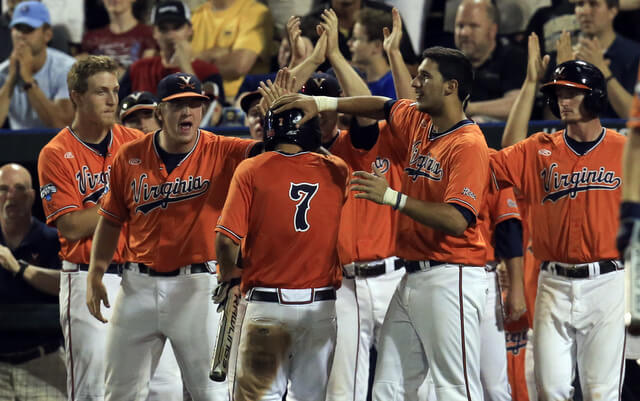 In 2015, an injury-riddled Virginia team slumped in the regular season and needed a series win in the final regular-season series at North Carolina to sew up a bid in the ACC tournament. They made the NCAA tournament as a No. 3 seed and swept through the Lake Elsinore Regional, defeating Southern California (twice) and San Diego State. They hosted Maryland in the Charlottesville Super Regional and clinched a trip to the College World Series on Ernie Clement’s two-run single in the bottom of the ninth of the second game.

In Omaha, Virginia defeated Arkansas and Florida (twice) to set up a finals rematch with Vanderbilt. The Commodores won the first game 5–1 before the Cavaliers evened the series with a 3–0 victory behind five innings from surprise starter Adam Haseley and four from Josh Sborz. Virginia fell behind early in the decisive third game, giving up two runs in the first inning, but Pavin Smith homered to pull the Cavaliers even and singled to score Haseley with the eventual winning run. Brandon Waddell threw seven strong innings, aided by an acrobatic, run-saving stop from third baseman Kenny Towns, as the Cavaliers won 4–2 to capture the program’s first national championship and the first for an ACC program since Wake Forest in 1955.